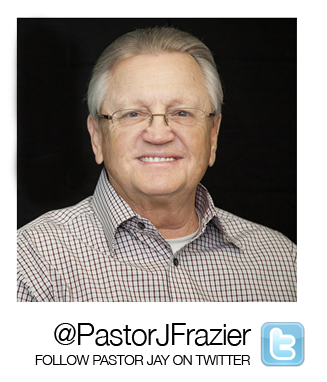 Pastor Jay Frazier was born and raised in Kingsport, Tennessee. He enlisted in the United States Marine Corps at age 20 and fought for our country in the Vietnam War. He returned to Kingsport and attended East Tennessee State University with a major in history. The Lord saved Pastor Frazier in 1970.

Believing that God had called him into full-time ministry, he started at Temple Baptist Church in Kingsport, Tennessee as a bus captain, visitation director, youth director, and assistant pastor. He attended Liberty University in Lynchberg, Virginia, and later graduated from Covington Theological Seminary. In June of 1973, Pastor Frazier married Claudia Robinette, also of Kingsport, Tennessee, and an active member of Temple Baptist Church.

In February of 1974, they moved to Bristol, Tennessee, to serve at Tennessee Avenue Baptist Church, where Pastor Frazier held the positions of bus/visitation director and assistant pastor. In December of 1974, Pastor Frazier was called to Grace Baptist Church in Belleville, Michigan, where he served as pastor for almost 14 years and had two daughters. Having inherited over $400,000 of church debt, he was able to see the church completely debt free before resigning in May of 1987.

Pastor Frazier moved his family to Cocoa, Florida in 1987 to accept a pastorate position at Calvary Baptist Church where he still serves today. During Pastor Frazier’s 26 years of leadership, God has continually blessed the ministry including seeing the exponential growth of our Missions program from 26 missionaries in 1987, to the 83 missionaries we currently support.